The bright New England sun scorches the asphalt landscape, and instead of bearing its hot and hazy rays, we are in a crisp, air-conditioned office surrounded by the greatest digital technology Adobe has to offer and where Michael feels most himself – in his design studio. Michael works as a content developer creating digital media for Quinnipiac University’s online marketing department. Michael holds a BA in TV, Film and Media Arts and an MS in Interactive Media and Communications degrees both from Quinnipiac University. He didn’t go too far from his alma mater as his connections to the University and to his native home in Connecticut are important to him. 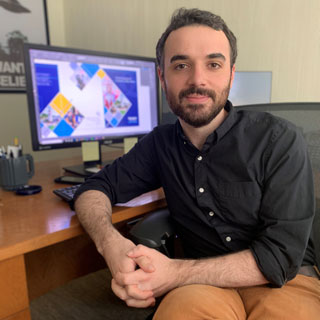 Being the creative one in an Italian family is not always easy. When your father and brother are into football and share a trade of being a mechanic, your love of digital art, design and history may seem a bit out of place. At the age of six, Michael found his passion for film when his mom took him to see the re-release of Star Wars: A New Hope. For those of us old enough to see it when it was shown in theatres originally, we can understand his obsession.

Since that film, Michael found himself connecting to the arts. In high school, he liked the idea of interactive media and design, but didn’t have any real direction when it came time to apply to colleges and was left unsure of which way to turn.

After high school, Michael worked at a grocery store in his hometown and quickly grew bored of that – he craved more. His mother began her associate’s degree at Gateway Community College and found herself inspired by the students and the professors. She encouraged Michael to apply.

With a gentle push from his family and a bit of blind faith, Michael enrolled in Gateway where he found he was exactly where he was supposed to be. He met a professor who soon became his mentor. Tom O’Neil, a journalism professor, saw something special in Michael and guided him throughout his educational journey and to this day, they remain friends. Professor O’Neil happened to have close ties to Quinnipiac University where he introduced Michael to the TV, Film and Media Arts program. The program and the school were a perfect fit. With the support of his family and Tom’s mentorship, Michael transferred from Gateway Community College to Quinnipiac University and began his BA in Film, TV and Media Arts where he graduated in 2015. 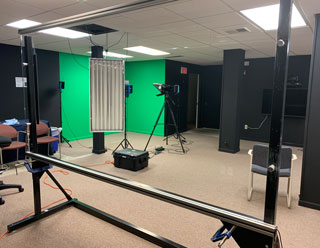 He credits a lot of his learning at QU from a combination of classroom activities that focused on digital media design and on the job training in his undergraduate work study job as a production assistant. This experience coupled with his love for learning allowed him to push himself beyond his comfort zone learning many new things. Through this job, he made connections with faculty and staff. To this day, many of those people will stop and say hello when he is on campus.

As amazing as a ‘bright lights, big city’ job sounded, finding the right fit for work, school, and home is important. Michael’s tight-knit relationship with his family meant that he didn’t want to travel too far from home for a job. A creative development position in digital media design was available at Quinnipiac University. Three interviews and one recommendation from his on-campus supervisor later, Michael was hired by QU in 2015. He was well-prepared because of his undergraduate degree in media and his work experience as a production assistant. 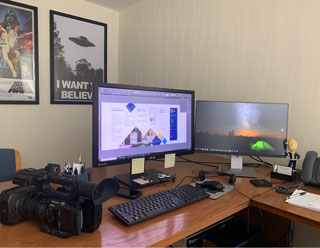 His love for learning new things persisted, and Michael soon found himself back in the classroom - an online classroom this time. He pursued an MS in Interactive Media and Communications at Quinnipiac University. “The professors were really nice and passionate about what they did. The courses were fun and interesting. They also opened the door to learn something new and allowed you to put yourself out there.” Michael was simultaneously pushing his creative side at work while sharpening his digital media skills in the online classroom. As he learned something new, he was able to apply it to his projects at work consistently opening new and exciting opportunities by expanding the capabilities of delivering content.

Michael is currently working on a web design project, something that he has always had a deep interest in. He has the foundation and passion that allows him to stretch his creative and technological skills. Learning something new is one of the perks of the profession and why he loves his job. He smiles when he says to me, “It’s never the same day twice.”

Michael’s academic experiences from Gateway Community College to Quinnipiac University have given him an amazing opportunity that allowed him to follow his passion, build on the skills he has learned and continue to make connections here at QU. Like his tight-knit family, Michael has found his home here at Quinnipiac.

Can you tell me about the transfer process from Gateway Community College to Quinnipiac University?

The transfer process was relatively simple. I met with an admissions representative on Mount Carmel and they walked me through the entire process. They were very adamant that if I ever had a question or concern, that I could reach out to them at any time. It was seamless experience. 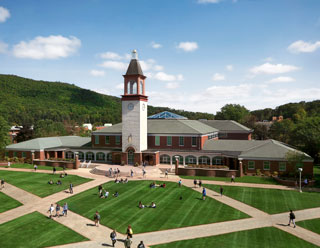 Tell me what you liked about your online classroom experience?

Your entire class is in Blackboard so you see everything step by step. You see your progress as you are going. You can submit and access your work wherever and whenever you need to, and that convenience was very important to me. It felt like the next step in the evolution of education.

How did your graduate degree in interactive media and communications prepare you beyond what you already knew from your undergraduate studies?

The MS in Interactive Media and Communication degree really prepared me beyond what I already knew from my undergraduate studies because I was able to immediately apply the skills and knowledge I gained to my career. As I was going through the master’s program, I was able to expand my skillset by using new technology/software I just learned to better standout in my field. Techniques I learned in the program are being utilized to better accomplish my tasks at work and really help me grasp more advanced skills.

Because your master’s degree was online, did you find you made the same strong connections you did as an undergraduate?

Many classmates connected on social media, and many of us became friends with each other outside of the classroom. Those connections are still strong today. Because it is a global classroom, you connect with people around the country or right in your own town.

You have your undergraduate degree and master’s degree from QU. Why did you choose to work here too?

I feel a strong connection to Quinnipiac because of the opportunities it gave me. The professors, the students, and the course work all prepared me for my professional life. My experience here at the University has given me the bug to always quest for more. 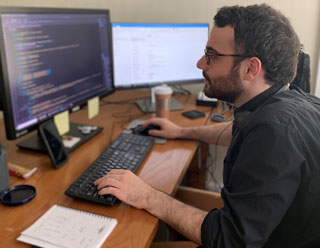 The alumni network is pretty expansive. What has been your experience as an alumnus?

Alumni are so receptive to helping other Bobcats. I have had great interactions with the network and found that we have an inherent connection to want to help each other.

So, what about Quinnipiac made it a perfect fit for you?

Quinnipiac seemed to be the perfect fit for me because of the academics. Regardless of what path I wanted to pursue, there was an option for me. I remember feeling excited over all of the program options that really spoke to me, especially the digital media and design program Mix that with the centralized location in Connecticut, the beautiful campuses, amazing students and passionate faculty, it was a perfect fit. QU is still a great overall experience to be a part of.

Why was getting a master’s degree such a personal and important achievement for you?

Aside from my love for learning, I am the first person in my family to earn a master’s degree.

What advice would you give other people when embarking on higher education?

It’s important to find the career path that speaks to you. Find your passion and pursue it.

How to Write a Personal Statement for Graduate School

Understanding Graduate Financial Aid: How to Pay for Grad School