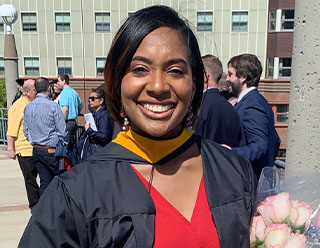 Fulfilling her calling of becoming a nurse has always been on the forefront of Leslie's mind, which is evident in how far she has come from high school to earning her Master of Science in Nursing degree at Quinnipiac University. Long before Leslie earned her graduate degree in nursing, she took care of others. Leslie tells me that when she was eight years old, her ten-year-old brother was hit by a car and broke his leg. She was his gatekeeper. She propped his leg up on pillows, retrieved various things from around the house that would make him comfortable, and when he had visitors, she made sure to tell them to be gentle when signing his cast. When her mother was in a car accident, it was Leslie that helped nurse her back to health. Perhaps it was Leslies’ great-grandmother’s Alzheimer diagnosis that solidified her future in healthcare. Looking back on those childhood moments, Leslie’s father tells her that he always knew she would become a nurse. Her journey was neither easy nor direct, but she stayed focused on what is important to her – family and education.

In her senior year of high school, Leslie had the world in front of her. She planned on going to college in New York City to become a physician assistant, but her plans were unexpectedly changed. Her daughter arrived one month after Leslie graduated high school. The birth of her daughter only encouraged her to stay the course. She applied to Gateway Community College where she could go to school and still be home for her daughter. She received an associate degree in general studies in 2007 and began working at Yale University in a non-medical capacity. A few years later, Leslie applied to nursing school and found there were waitlists to get into area programs.

Once again, she refocused and became a Licensed Practical Nurse (LPN) in 2009 and began working in a long-term care facility. She understood the importance of this population and drew from her experience from her great-grandmother’s Alzheimer diagnosis. Leslie recalled that when visiting her great-grandmother in the nursing home, some families were a constant presence while others were absent. As a caretaker and nurse professional, Leslie and the staff became the family that some did not have. This job became personal to her and she has never left it or her patients. 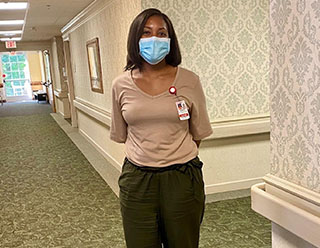 Leslie took a couple of years off from school before she went back to become a Registered Nurse (RN). This time, she needed additional prerequisites before she could apply to the RN program. She decided to earn her BS in Public Health instead because this was a faster route to her bachelor’s degree which meant more money and stability for her family. Ambition and her daughter continued to be her focus. Leslie says, “It actually turned out that getting my bachelor's in public health was a little bit of a blessing in disguise, because I think I now take a different approach [to nursing].” Although this was not her original path, Leslie is not one to give up on her dreams.

Armed with an associate degree, an LPN and a BS in Public Health, she returned to Gateway Community College to earn her associate degree in nursing. She remained at the long-term care facility where Leslie’s roles changed as she continued her education. Her eight years of nursing experience combined with her education allowed Leslie several opportunities for promotions. Because she knows how powerful education is, she decided that a graduate degree in nursing must be her next step. “I wanted to advance in my career, and I knew I would need my master’s [degree].”

I wanted to advance in my career, and I knew I would need my master’s [degree].

"I wanted to advance in my career, and I knew I would need my master’s [degree]. "

Returning to school meant time away from her young daughter. Although Leslie knew this was important for their future, she still struggled with balancing life as a single mother, working full time and managing a graduate degree in nursing. Thankfully, Leslie had support from her family who helped care for her daughter and encouraged her to follow her dreams. Armed with support and a different mode of learning, Leslie figured, the best way to do that was online. She said, "Even if we were sitting at the table doing our homework together, we would be doing it together.” Leslie understands the impact her work ethic and ambition has on her daughter and goes on to say that education helped her reach her goals and fulfill her calling.

Leslie admits that her master’s in nursing was not easy. She said, “You understand that because you're a working professional; you're supposed to be at a different level when you go into a grad program.” There were nights that Leslie stayed up late to complete her assignments so that she could spend quality time with her daughter. She understood the sacrifice at the time and knew that the payoff would be exponentially worth it. 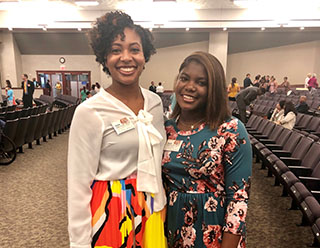 Her MSN did pay off. Leslie was promoted to a nurse educator role while still in the graduate nursing program, and when she graduated, she received another promotion to director of nursing. In the eleven years she has been at her current place of employment, she went from an LPN to a director of nursing. Each one of her promotions came with education, a desire to advance her profession and a laser-focused mindset to be successful.

Leslie always knew that she would fulfill her calling no matter how long it would take her or what path she chose. She is an example for her daughter and others that all things are possible. Leslie says she is excited to concentrate on her new role, spend time with her teenage daughter and enjoy her life.

How did you balance family, work and school?

I cut down my social life while I was in school so that I could focus on getting the work done and being a good mom. I had taken a different job within Yale University to accommodate my school schedule.

Can you talk to any favorable experiences you have had with faculty?

My advisor was amazing. At more than one point in the program I was overwhelmed. I didn’t get the grade I wanted to get, and I felt like quitting. He was very supportive. He really took the time to assist me when I wanted to give up.

How has this degree changed the way you currently do your job?

What I’ve learned during the program has helped me to take a different approach when solving problems at work. I look at every problem as a project and involve the team more instead of trying to tackle everything myself.

How did Quinnipiac contribute to your growth?

Quinnipiac has helped me grow professionally. It’s given me the tools to be more successful in my career.

Focus, desire and hard work led Leslie to fulfill her calling. If you are interested in advancing your nursing career, Quinnipiac University’s School of Nursing has bachelor's, master's and doctoral programs that may be the right one to help get you there.

Why Earning A BSN is Important

Will My College Credits Transfer Into a Bachelor's Degree?

How to Choose an Onine College: Essential Elements to Consider