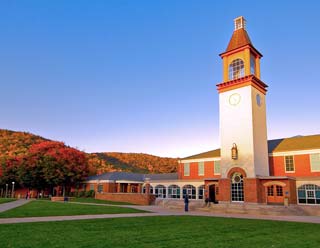 U.S. News & World Report has once again named Quinnipiac University as the top "Up and Coming University in the North Region" in its 2015 edition of Best Colleges, which was released today. This marks the third consecutive year that U.S. News has bestowed this distinction on Quinnipiac.

"It is an honor to receive this recognition for the past three consecutive years," said Mark Thompson, executive vice president and provost at Quinnipiac. "It speaks to the unwavering commitment Quinnipiac University demonstrates towards advancing academic excellence and national prominence at the university-wide level and within each school and college."

College administrators, including presidents, provosts and admissions deans, surveyed in the spring of 2014 for the 2015 edition of the U.S. News Best College rankings were asked to nominate institutions that they think have recently made the most promising and innovative changes in the areas of academics, faculty, student life, campus or facilities.

Quinnipiac also once again ranked among the top 10 regional universities in the north, according to U.S. News.